It's been a while since I've stopped to think about all the great stuff I've managed to get through during the spring, so here's a quick round up.

Jane Steele by Lyndsay Faye
I've never been a huge Bronte fan, but have liked pastiches of both her and Austen a great deal more. I was drawn in by the large quote on the back declaring, "Reader, I murdered him." Where Jane Eyre suffers quietly under her indignities, Jane Steele has no such intention. While Ms. Eyre is handwringing, Ms. Steele gets stabby. While it retains a measure of Bronte's darkness, Jane Steele's determination and backbone make it more of a rollicking Victorian adventure with secrets, action, romance and the voice of a heroine who hopes the deeds of her past won't impede the happiness of her future.

Having two kids, a job and writing to do doesn't often afford me the gluttonous luxury of inhaling a book in one day. But on a sick day in April, I got to do just that with this incredible YA sci-fi. Told though e-mails, chat windows, journal entries, ship to ship communications, classified documents and some excellent first person narration from a sentient computer, we follow the survivors of a raid on a mining planet by a rival corporation as they try to escape their pursuers. Pulling together all the best parts of great sci-fi/horror, Kaufman and Kristoff tell an outstanding story that has left me dying for the next installment, Gemina, which comes out in October.

A Criminal Magic by Lee Kelly

Some reviewers have declared it a heady mix of Peaky Blinders and The Night Circus, which is a pretty good description. The 1920's of Kelly's novel has seen sorcery, rather than alcohol, driven underground by Prohibition, leading to dens where practitioners perform for the clientele before offering a hit of 'shine'- a concoction of distilled magic that offers a wondrous and addictive high. We meet Joan Kendrick and Alex Danfrey, both driven into this criminal underworld for different reasons; Joan, to aid her struggling family, Alex, as an informant with a troubling past. Together, they have to navigate the seedy world of gangsters whose only interest in magic is how much money they can make off of it. A cracking good read!

The Devil and the Bluebird by Jennifer Mason-Black

I've been anxious for this one to finally see the light of the bookshelves, because I was so utterly charmed by the ARC. Blue's life has been turned upside down more than once- by her mother's death from cancer and her sister's disappearance. So, when she's given a chance to find her lost sister by The Woman in Red at the crossroads, Blue takes it, no matter the conditions. The story is a beautiful journey woven though music, love and heartbreak, examining our need for meaning, the people we choose to call family and what we're willing to risk in exchange for a much longed for prize. For a kid raised on folk music, this was such a delight for me. 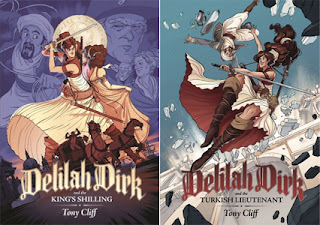 My girls are huge fans of graphics and I've really grown to love them too. The Delilah Dirk series was such a brilliant find- a no-nonsense, take no prisoners, sword wielding, ass-kicking Indiana Jones type heroine and her traveling companion, the loyal tea making Selim from Constantinople, make the world their playground in this fantastic series of adventures. I'm very pleased to own a Delilah "travel" poster advertising 'London-The Pinnacle of the Civilized World'. Of course, Ms. Dirk is kicking one of his majesty's soldiers out a window.

I have a particular place in the house where I keep MY graphic novels so that they do not get mixed up with my 9 year old's graphics. This is an amazing, angry indictment of a not-too-distant-future where the dominant patriarchal society rids itself of 'non-compliant' women by shipping them off to a desolate penal colony colloquially known as "Bitch Planet". It follows some of the unfortunate inmates as they navigate the horrifying world of corrupt guards and mental torture as well as shedding some light on what brought them to the penal colony in the first place. The stories are well fleshed out and moving--so looking forward to the next volume being released in September of this year.
at May 16, 2016 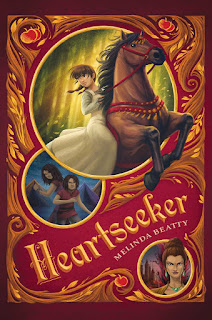